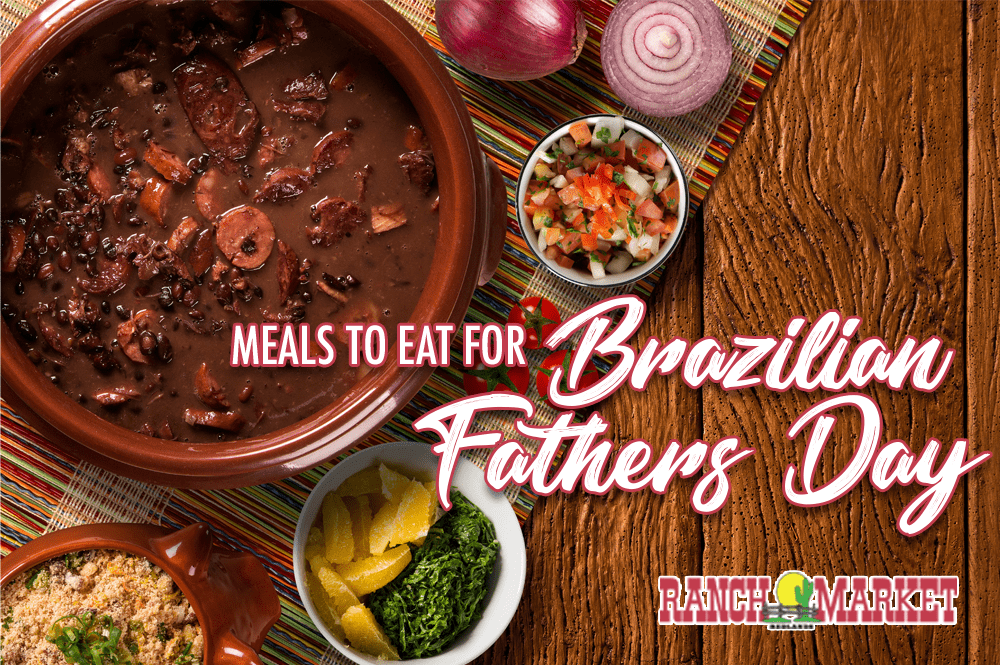 Overview: Learn the significance of Brazilian Father’s Day, and traditional meals  that are eaten in celebration

Throughout our lives, fathers play the role of the pillar on which everything stands – benefiting both their children and society as a whole by choosing to act in the most honorable ways.

Brazilians seek to show appreciation to their father figures on the second Sunday in August in honor of St. Joachim, the father of the Virgin Mary and saint of fathers and grandfathers. The day is celebrated with family activities and gifts for fathers.

On this favorable celebratory day, kids make DIY cards of thanks and buy a gift for their fathers. From cologne to tech gadgets, fathers get a lot of gifts from their kids. And how can we forget a full-fledged BBQ party, hosted especially for fathers, with the fresh meat seasoned with organic herbs and sauces imported from around the world?

Different dates are associated with Father’s Day when we dig deep into its history. Starting in the United States, Father’s Day is celebrated on the third Sunday in June, but we can’t call it the first.

Historically, the first Father’s Day celebration was held on July 5,1908, and the service was held at Williams Memorial Methodist Episcopal Church South. Grace Golden Clayton suggested the service to the pastor as a memorial after a tragic incident of mine explosion in nearby Monongah took place — killing 361 men the previous winter. Another explanation for the service was Mothers’ Day, which had been celebrated for the first time two months prior in Grafton, a town that was 15 miles away.

Harry Meek is also a name in introducing Father’s Day is Harry Meek. He is known to be the founder of the first Father’s Day with his organization in 1915, and the day they chose was the third Sunday in June, the closest Sunday to Meek’s birthday.

In 1910, in Spokane, Washington, the first Father’s Day was celebrated. Mayor Frank Burke of Spokane proposed the holiday to honor fathers who fought in World War I. Calvin Coolidge recommended the day as a national holiday in 1924, and by 1966 Presidents Lyndon B. Johnson, Richard Nixon, and Gerald Ford proclaimed it a national holiday to be celebrated on the third Sunday of June.

From planning an outdoor picnic and flying a kite in the backyard to firing up a grill in the BBQ, there’s just no limit to ideas to make Father’s day special. Brazilians prefer a good churrasco, usually in an old-fashioned manner (either at Dad’s favorite steakhouse or barbecuing it up in the backyard on a cozy weekend to enjoy their time together).

Since fathers try to bond the family, the day is usually filled with joy, laughter, and lovely get-togethers. It’s a day to fill the stomach where Brazilians hold huge feasts and make it an all-you-can-eat day. From barbecues to boasting skewers of roasted chicken, beef, pork, and sausages, a long table is set with all the appetizing meals.

These traditional Brazilian meals are everything you’d like to feast on when celebrating Father’s Day.

While there are many variations of Churrasco are available, the traditional Brazilian way of barbecue never goes out of fashion.

Preheat the grill for medium to high flame and gather the ingredients. Cut the steak into 2-inch wide strips. In a small mixing bowl, combine pepper, olive oil, wine vinegar, onion, garlic, parsley and oregano. Drizzle a small amount of salt and pepper on the steak pieces and roll skirt strips into coils.

Let the meat cook at an internal temperature between 155-165F. Once it turns brown, remove from the heat and cook the other side. Pour the mixture on each side of the skewer and serve the fresh and appetizing meal to your Father and family gathered!

◻ A pinch of chili powder

For the pastry, add flour in a bowl, stir in the egg, olive oil, and vodka. Gradually add water considering the consistency of the paste. Stir with a fork until the entire mixture comes together. Turn onto a surface and knead until it turns smooth. Pat into a slightly large disc and cover with plastic wrap. Place in the fridge for 20 minutes to rest.

In the meantime, boil chicken in another pan and shred finely once it turns cool. In a frying pan, add oil, onion, and garlic. Cook for about 2 minutes and add spices. Remove from heat and add chicken and cream cheese until everything comes together. Set the paste aside.

Use a 5.9 cm round cutter and roll 1 piece of pastry about 1mm-thick. Cut 6 round shapes of the pastry and place 1tsp of filling in each patty. Brush edges with little water and use a fork to seal the edges. Repeat the same process with the rest of the material and let it rest in the fridge for half an hour. Shape it like a dumpling.

For salsa, combine all the ingredients together, season, toss, and serve!

Pour enough oil in a pan for frying and heat to 170. Cook the pastels – each side for 2 minutes and drain on paper towel. Add this with BBQ and a side of mixed stir-fry vegetables and boom — you’ve won your father’s heart already!

Fathers work hard throughout the year and they, too, deserve to be pampered. When you’re arranging lunch or a dinner for your father, call his friends, and arrange some games for them before mealtime.

Set a game table, chess, and other board games. Prepping to show Dad you appreciate him might sound exhausting (and it very well might be), but the smile on your father’s face will be worth everything.