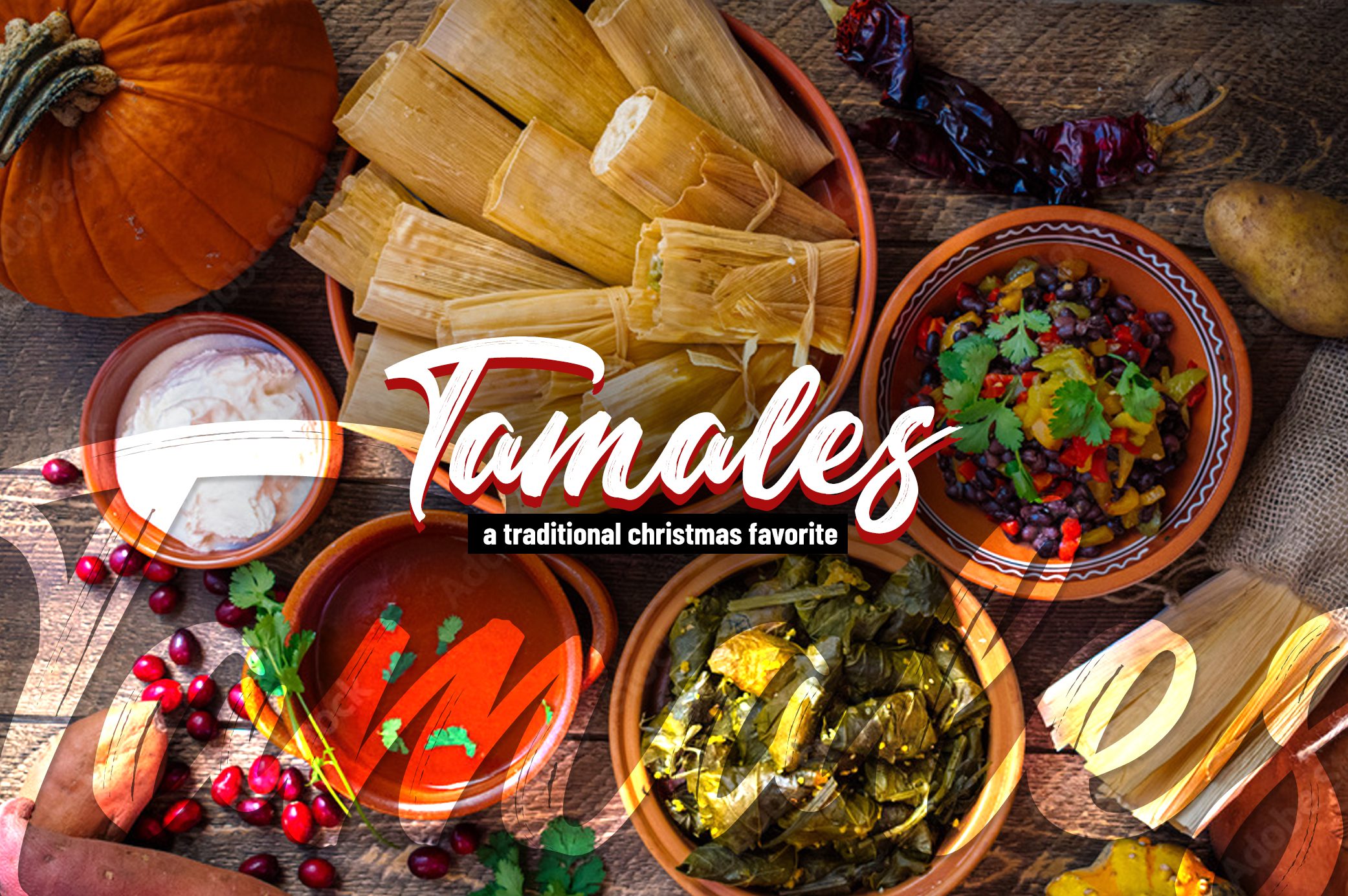 Overview: Tamales are a traditional Mexican delicacy, and they’ve become associated with Christmas and seasonal celebration. Learn how to make traditional tamales!

How would you describe a tamale to someone who had never heard of them before? You might say it’s a soft food consisting of a doughy outer layer with filling inside — and you’d probably say it’s delicious!

In addition to the seemingly simple masa dough and the savory (or sweet) filling,  a distinctive feature of the tamale is the husk that it comes wrapped in. And as those who have made tamales know, it’s not as simple as it looks!

The process of making tamales takes hours and often days to complete — while using nimble fingers to wrap each one in its husk, and staying mindful and alert when placing it into steam.

Tamales are one of the earliest staples of Mesoamerican food since long before the common era. The Mayas and Aztecs ate them, and there is evidence that the Incas of South America enjoyed them as well. The Olmec and Toltec peoples took them on their hunting expeditions and military endeavors as they made for a filling and easy-to-carry snack.

The name tamale derives from the primary language spoken at the heights of the Aztec civilization, mainly in central Mexico, and means “surrounded.” While different styles of tamales were developed in different cultures from central Mexico extending South to Argentina, common to all are a few things that never changed: Masa (corn dough), a wrapper (made from a corn husk or a banana leaf), and the cooking method (steam).

How to Make Tamales This Christmas:

Looking for an easy-yet-authentic recipe to make tamales this holiday season? Look no further! What follows is a step-by-step recipe tutorial for you to follow. Tamales are easy to customize with your preference of chicken, pork, beef or vegetarian filling options. Plus, they’re made with zero lard or shortenings, which means they’re freezer-friendly so you can enjoy some now and save some for later!

Fill up your cart at Redlands Ranch Market!

Place the corn husks in a large pot and cover it entirely with warm water. Soak for at least 30 minutes.

In the bowl of a large stand mixer, add masa harina, salt, baking powder, and cumin. Whisk to combine. Add the oil and beat at a low speed until the mixture is well combined. Gradually add the stock and beat on a low speed, so the ingredients come together.

Once the stock is incorporated with the dried ingredients, increase speed of the mixer to medium and beat for 10 minutes until the texture is fluffy. Cover the mixing bowl with a damp paper towel and place in refrigerator.

Let’s prepare the filling – Combine the enchilada sauce with filling. The filling should be coated with sauce but not runny.

Assemble the tamales by placing the wide end of each husk on the palm of your hand and the narrow end at the top. From the middle of the husk, spread 2 tbsps of masa with the back of a spoon in an oval or rectangular shape. Remember not to spread the masa to the ends; leave about 2-inch border on the both sides of the husk.

Spoon 1 1/2 tbsp of the filling down the center of the masa and fold both sides to the center. Finish off by bringing the pointed end of the husk toward the filled end. Make sure that the snug closure so the filling doesn’t open during steaming. Now secure the wrap by tying a thin strip of corn husk around each tamale. This tying process will keep the tamales from falling apart while they’re in the steamer.

For steaming, use a deep pot to steam the tamales. (If you’re especially ambitious, you can buy a special tamale steamer pot.) Fill the pot with water up to the fill line. Set the tamale rack over the water surface and place the wraps upright with fold against the sides of the other tamales to prevent them from unfolding. Set heat on high for about 10 minutes and bring to a boil. Lower the heat and simmer for 2 1/2 to 3 hour while keeping the lid tightly. To test if done, put one tamale on a plate and take off the corn husk. If it comes without sticking, the tamale is done. If not, let it steam for another 10-15 minutes. Top with some chopped vegetables and your tamales are ready for Christmas eve!

Why Are Tamales a Christmas Tradition?

The Christmas season holds a lot of traditions and invokes fond memories for those who celebrate the holiday. There are so many sensory experiences attached to memories of Christmas: The sight of brightly-colored holiday lights, the sounds of favorite Christmas carols… and for many, the smell and taste of Mexican tamales!

The connection between tamales and special occasions goes way back to the aforementioned Mesoamericans. Among those native cultures, there was a common belief that the gods had created human beings out of corn, and thus, corn was seen as a spiritually significant substance. Over time, tamales made with became incorporated into ritual events, cementing their association with special occasions. As Christianity spread in Mexico, tamales became thought of as a perfect food for Christmas, one of the most significant Christian holidays.

Today, tamales are a major element of the Christmas season among the Mexican-American population in Texas. Many Texan families spend their Christmases coming together to make and eat the classic corn husk-wrapped treats, sharing the tradition with multiple generations.

Interested in learning more about the tamales history? Read more about tamales, traditions, and Christmas.

If you’ve never had tamales at Christmastime, we urge you to give them a try this December. And if tamales are already a part of your holiday tradition, we hope you enjoy unwrapping those delicious treats just as much as unwrapping your presents.

A tamale dinner is a classic choice for your family gathering this holiday season. This Mexican specialty will fill your home with magical aromas and delicious flavors, and keep your guests satisfied until long after Santa has made his rounds.

If you’d rather let someone else do the bulk of the work for you, you’re in luck! At Redlands Ranch Market, tamales are one of our specialties. You can choose from tamales that are prepared to steam at home, or pick up some tamales that are fully cooked and ready to eat. Drop by our store in Redlands, or contact us for more info today!